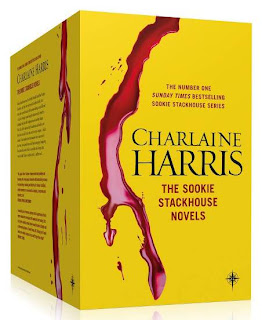 Hail Mighty Readers,
So you've just got caught out, someones asked you what you want for Christmas and that list of yours is empty after having already passed it to friends and family. Alas that Girl/Boy/friend/Wife/Husband, has left it to the last minute and you don't know what you want.

Luckily for you our friends at Gollancz have just let us know about these two beautiful boxed editions. Yes we can hear the salivation from our bookish friends already so feast your eyes on these. Here's the publisher blurb:

The perfect gift: all ten Sookie Stackhouse paperbacks in one sexy boxset with brand new artwork. A must have for fans of HBO's TRUE BLOOD series!

The must-have novels which inspired HBO's hit series TRUE BLOOD! Sookie Stackhouse is a cocktail waitress in a little bar in Bon Temps, a small town deep in Louisiana. She's funny and pretty and well-mannered, but she doesn't have that many close friends - mind you, that's not so surprising when you consider how few people can appreciate her abilities as a mind-reader. It's not a quality that has the guys beating down her door - well, unless they're vampires or werewolves or the like… but they're not just supernatural freaks, some of them are friends, even family.

The box contains: Dead Until Dark, Living Dead in Dallas, Club Dead, Dead to the World, Dead as a Doornail, Definitely Dead, All Together Dead, From Dead to Worse, Dead and Gone, Dead in the Family. 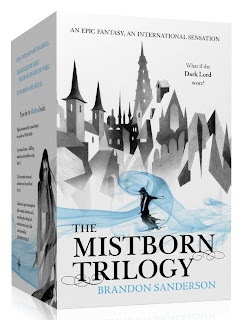 A boxed set of the landmark fantasy from Brandon Sanderson, the man credited with breathing fresh life into Robert Jordan's WHEEL OF TIME.

An epic fantasy set in a world where the Dark Lord has gained dominion over the world.

A world of ash and pain. A world subjugated. But a world where magic can be drawn from metals. A world waiting for a new heroine, a new hope.

A word of mouth bestseller in the USA, Brandon Sanderson's Mistborn trilogy have now become a massive hit in the UK, introducing readers to the work of one of the genre's great talents. A master of world-building, sweeping plots, believable characters and engrossing magic systems.

We hope we've helped you out of a sticky situation.

Gareth and Lady Eleanor.
Posted by Falcata Times at 08:10

I need to get the Sookie Stackhouse books...I really do...this is the perfect way for me to start the series. I must find this box set...