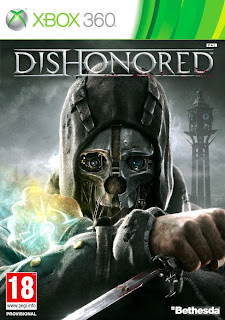 Hail Mighty Readers and Followers of the Calloused Thumbs,
Our Friends at Bethesda have let us have a sneaky peak at the forthcoming Dishonored Gameplay.
To us it looks amazing, Lady Eleanor is preparing herself to explore the Steampunk world, practicing her assassination techniques via Assassin's Creed and of course is working out what snackages will be required to sustain her on her campaign of vengeance.
So here, for your viewing pleasure is the snippet that got us so excited...
Game Blurb:
Dishonored casts you as a supernatural assassin driven by revenge. You are Corvo, the once-trusted bodyguard of the beloved Empress. Framed for her murder, you become an infamous assassin, known only by the disturbing mask that has become your calling card. In a time of uncertainty, when the city is besieged by plague and ruled by a corrupt government armed with strange technologies, dark forces bestow supernatural abilities upon you.

In Dishonored, creatively eliminate your targets with the flexible combat system as you combine supernatural abilities with weapons and gadgets at your disposal. Pursue your targets under the cover of darkness or ruthlessly attack them head on with weapons drawn. The outcome of each mission plays out based on the choices you make.

Dishonored will be available throughout Europe on October 12, 2012, and is slated for release on the Xbox 360, PlayStation 3, and PC.

My wife and and I watched the trailer and we both know what we will do in October ...