The David Gemmell Legend Award Ceremony turned out to be a night of glamour, fun and surprises, even though it all started in a strangely deserted London back street on the evening of June 19th.

I'd been standing on the corner by Euston station trying to get orientated on my map when a very nice taxi driver – sitting at the lights – leaned out of his cab and asked me where I was headed. I gave him the address and he gave me turn-perfect directions to the Magician's Guild Headquarters straight off the top of his head. Oooh they are good aren't they?!

Following his instructions I found myself on this eerily quiet little backstreet while the rest of London bustled manically on all sides. There weren't many doors onto the street and it took a few minutes to find the Guild entrance but once into its plush interior, it was like stepping into another world.

You kind of expect the Magician's Guild Headquarters to have hidden secrets somehow, and it did. Inside this bland looking building there were at least two bars, a host of magical paraphernalia lining the walls and, most strikingly, via an upstairs doorway you descended down into a large and sumptuous auditorium with a full stage and room for nearly two hundred people. And I'm sure this was only a fraction of the facilities. 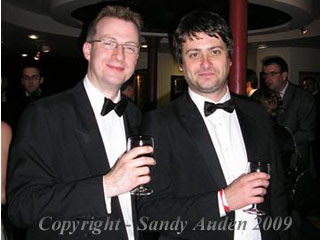 
The upstairs bar was the first destination and the dignitaries were starting to gather. The dress code for the event was formal evening wear and it was great to see everyone in smart attire. The guys were swanning around the room like little James Bond clones and the gals were gliding elegantly from one gathering to another, draped in glamorous flowing colours and sparkling sequins.

There were representatives from several aspects of the publishing industry: the bubbly publicity reps who seemed to know everyone in the room; the senior editors with their serious faces; a whole range of talented authors; a rabble of reviewers and interviewers from all sorts of websites and magazines; and the all important fans, in whose hands the award voting had been placed. For that was why we were all there, in the Guild Headquarters - to find out who was to be the lucky recipient of the David Gemmell Legend Award.

Until now, the UK has only had one major set of Fantasy awards, given out each year by the British Fantasy Society (BFS), and those are voted on by members of the BFS. Thanks to the hard work of fantasy authors Debbie Miller, Stan Nicholls, Anne Nicholls, James Barclay and dedicated support crew for admin and webmastering, the UK now has a new award that is voted on by fans worldwide. So not only does the award give the public an opportunity to shout about their favourite fiction but in promoting excellent fantasy it also honours the name of author David Gemmell, one of the best selling fantasy authors ever.

The winner of the award was to be picked from the impressive shortlist shown and it was proving to be difficult to predict who was going to come out on top. Much debate was had over glasses of wine as the growing crowd gathered in that bar before we were invited into the auditorium area. When the melodious tone of the gong rang out, we were ushered to the comfortable seats and the ceremony began.

But this wasn't going to be a simple case of introducing the shortlisted stories and wheeling someone important in to announce the winner. Oh no, this was going to be much more fun.

A year's subscription to SFX magazine. (Donated by Future Publishing.)

A limited edition Valyrien bust of "Sandor Clegane - The Hound of Lannister" (only 500 made). (Donated by HarperCollins.)

A chance to make a cameo appearance in Orcs: Bad Blood 3: Inferno, by Stan Nicholls. (Donated by author.)

Own a Jaguar for a weekend. (Donated by Jaguar Cars.)

A first hardback edition of Legend, signed by David Gemmell and from his personal library. (Donated by Stella Gemmell.)

Opening the show, author (and trained actor) James Barclay gave a rousing rendition of 'A Call To Arms' from David Gemmell's Legend; this was followed by an introduction to the award by Stan Nicholls and Debbie Miller, a heartfelt remembrance of David Gemmell by Anne Nicholls and an introduction to the charity Medecins Sans Frontieres. This later intro may seem a little unusual but what followed was an auction on behalf of the charity and there were some very desirable items coming up for grabs. James Barclay did an awesome job separating people from their money (no easy feat in these times of recession) and when the last item went under the hammer, the award had raised nearly £1200 for the charity. 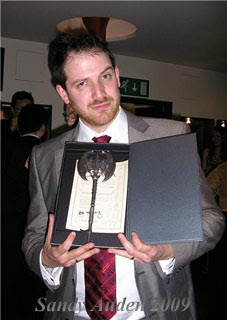 Next, it was time to present the nominees with their own little prize – they each received a baby Druss the Legend Snaga axe – which you can see Joe Abercrombie modelling so well on the left . These were so sweet (the axes that is, although Joe has his moments too) but there was better to come. After each of the nominees (or their representatives) had accepted their baby Snaga, the winner's axe itself was brought onto the stage by Simon Fearnhamm of Raven Armoury. It was a larger, quite beautiful Snaga clearly forged with much love and attention. So with half the audience drooling in admiration over the trophy and amid promises from Simon to show everyone the full-size Snaga later in the bar, Alain Nevant of Bragelonne publishers, and Kate and Luke Gemmell announced the winner.

And the winner was: Andrzej Sapkowski for Blood Of Elves

Rapturous applause from the crowd.

The award was accepted by Gollancz publisher's Jo Fletcher but Sapkowski's reaction would later be circulated via email:

"I am very happy and proud to be a winner in the contest for The David Gemmell Legend Award, the prize precious to me indeed, as I am a great admirer of the writings of the late David A. Gemmell. I would like to express my gratitude to all the readers who voted for my book. I would also like to thank and congratulate all the other fellow writers in the final poll. Finally, it is fantasy - our genre - that was the ultimate winner."