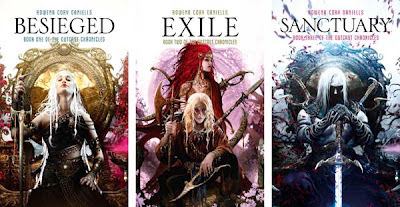 Do you read in only one genre?

I don’t. I read across a range of genres, including factual books and biographies. I’ll read anything that looks interesting. In fact, if I’m stuck on a train without a book, I’ll read the back of someone’s newspaper. I just can’t help myself.

As a writer, out of curiosity, I used to try to see the titles of the books people were reading on the train. The regulars would be reading across genres. Now with e-book readers and iphones I can’t tell – the down-side of e-readers – but I suspect the diversity is still there.

So if readers read across lots of genres, then why wouldn’t writers write across genres? I’ve been interviewing writers and discovered that many of them write across two or three genres. Since my field is Speculative Fiction, I’ve been interviewing writers of fantasy, SF and Horror. They will often also write in the YA, Mystery and Historical genres. I suspect YA and Fantasy are a comfortable mix because fantasy books often have a YA aged protagonist. And it doesn’t surprise me that speculative fiction authors write Mystery and Historical books. After all, to be a good Fantasy writer you need a broad general knowledge of history, which often arises from a fascination with the past. To be a Fantasy or SF writer you need to be able to construct intricate societies, which is a bit like constructing the layers of a mystery. And a horror writer has to build suspense, so thrillers and mysteries is a natural mix.

In the past large publishers liked to keep their writers pigeon-holed in a particular genre, or even a sub-set of that genre. When my first trilogy came out a well known fantasy-romance writer contacted me to tell me how much she’d love my books. She confessed they were the sort of thing she wanted to write, but her publisher wouldn’t let her. Now, with the self-publishing phenomenon, writers are able to release their quirky books into the wilds. These are the books that authors wrote even though they knew their publisher didn’t want the manuscript. These are the books that authors wrote because the story and characters wouldn’t give them any peace until the manuscript was written.

(It’s true, our characters do talk to us. In fact they will refuse to do things that we have planned for them. If I jam up as I’m writing, it will often be because what I’ve planned for a scene doesn’t suit the character. I’ve learned to go with my instincts).

I’m happy to say the lines of genre are blurring as more and more sub-genres spring up. Ten years ago, I used to go into the local specialist bookstore and ask for Indie Press books that pushed the boundaries of genre because I was always looking for a challenging read. Now, these books are readily available.

And we can find them thanks to dedicated, articulate blog reviewers, who can analyse what did and didn’t work for them in a book. We have GoodReads, where we can share our love of books with friends whatever the genre.

Although my new trilogy is a fantasy, when I set out to write The Outcast Chronicles, I wanted to the world building to be as rigorous as an SF book because I felt that the consequences of power, both for the afflicted and for those without it, had not been fully explored in the fantasy genre.

How would we really feel about someone who had an extra sense? How would this power affect the way they saw the world, and the way they interacted with other gifted people? I think those without gifts would resent the gifted and fear them. I also think these gifts would be expressed differently in males and females and this would shape their society.

All of this is interesting, but it is only when these fears and prejudices affect individuals that you have a story. With this in mind, I took my characters and put them in terrible situations that made them question what they believed.

One reader said: ‘Daniells has a gift at opening the readers eyes to some of the darker aspects of human nature with the often harrowing deeds in the worlds of her creation; often without the reader even realising they are making the comparison until long after the last pages has been turned.’ (For the full review see here).

I love the fantasy genre and I wanted to push the boundaries because that is the kind of book I like to read - interesting characters in difficult situations - and it doesn’t really matter what the genre is. I think if you catch yourself thinking about the characters afterwards, then they’ve come to life.

What books have you read that challenged the genre and did the characters linger in your mind?