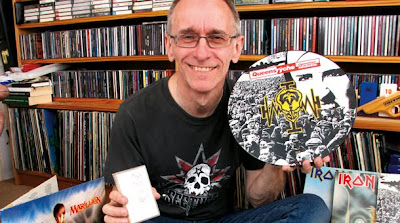 If you ask readers to name British Horror Authors then one of the first names to pop up tends to be Shaun Hutson.  As such we've been lucky to grab a quick interview with the author of Slugs, Spawn and many others in time for the release of his latest project, X The Unknown, based on the classic Hammer Horror Film.  Here's what he had to say:
Falcata Times:  How would you say that your perspective has changed about selling your own work with multiple novels under your belt?
Shaun Hutson:  Selling novels these days is much harder than it used to be.  It seems that the number of books you have in print or have had published counts for nothing (or it doesn’t in my case, it’s probably different if you’re J.K. Rowling or Stephen King!).  During the last ten years publishing has undergone so many changes (most of them for the worst) and I find it almost unrecognisable from the business I entered almost thirty years ago.  It seemed that back then everyone had a chance of getting their work published and that once that work was in print there was a chance of getting it to the public but now it seems that a select band of authors are the only ones being published and supported by publishers and book sellers.  Bookshops couldn’t give a fuck about new writers unless they’ve got a huge publishers campaign behind them.  It’s a very depressing picture unless you’re a rich and well established writer.  Or a celebrity of course.  If you’re a so called celebrity then you can expect to be given shit loads of money for your ghost written drivel.  So, if anyone wants to become a writer then the best thing would probably be to go on Big Brother or have an affair with someone famous!  Talent counts for nothing and if you don’t believe me just look at the bookshelves these days.

FT:  How would you sell yourself as an author?
SH:  Nowadays it would be almost impossible because most of the editors are young and either haven’t heard of me or would instantly dismiss my stuff because it’s ‘Horror.’  A genre that the publishing business has done its best to destroy since the popularity of crime novels spiralled out of control.  It’s strange because usually a cinematic trend is reflected in publishing but the dominance of horror at the box office has been completely ignored by the book business.  No one wants to publish traditional horror anymore even though there are hundreds of thousands of people who want to read it.  Now editors think they’re being ‘edgy’ by publishing things like TWILIGHT which, in my humble opinion, is one of the worst things that ever happened to horror.  Someone told me that they actually saw a section in a bookshop that proclaimed ROMANTIC HORROR.  All the confrontational elements have been taken out, no one wants originality anymore they just want books that are TWILIGHT clones or that are about zombies but all with ‘edgy’ twists of course.  Traditional horror is dead and buried.  The death knell for the horror novel was sounded with the publication of THE SILENCE OF THE LAMBS back in the 90’s.  Horror has been on a downward spiral ever since.  It was always the ‘poor man’ of the business, looked down on by publishing in general but it made money.  Now it doesn’t even get the chance to make money because no one wants to publish it.  Or maybe that’s just me they don’t want to publish!

FT:  How would you say that your experience of writing and publishing has changed your method's of writing?
SH:  Now I write with far less freedom and am constantly aware of what publishers are looking for whereas in the beginning I used to write what I wanted to write and knew that the publishers would accept it anyway.  Now there are so many hoops to jump through it drives you mad.  If you don’t do what they want then you don’t get published it’s as simple as that.

FT:  With the experience that you've gained now, what do you wish you could have told yourself when you were starting out that you now know?
SH:  Nothing really.  I just wish I’d known that the genre I loved writing so much was going to disappear!

FT:  What characteristics of your protagonists do you wish that you had yourself and why?
SH:  Most of my protagonists are flawed in some way.  Most of them I don’t want any of their characteristics.  I used to write as a kind of purging process to rid myself of the darker feelings and thoughts I had so I certainly don’t want to be like the people I create.

FT:  Which of your characters are most like you and why?
SH:  My favourite character is Sean Doyle who appeared in RENEGADES, WHITE GHOST, KNIFE EDGE and HYBRID.  He doesn’t give a fuck about anyone or anything and if anyone pisses him off he shoots them!  Sounds good to me.  There are bits of me in every character I’ve ever created, no writer can help that.

FT:  What of lifes little addictions could you not live without and why?
SH:  Which of life’s addictions couldn’t I live without?  Well, I don’t smoke, drink or do drugs so that doesn’t leave much really does it?  Most days I wish I did all three…and to excess!  That probably accounts for why I’m such a boring bastard.

FT:  With regular trips for book tours around the country as well as to various Conventions, what is an absolute travel essential that you couldn't do without?
SH:  When I’m travelling I couldn’t go without music so an i-pod would be my essential travel accessory I suppose.

FT:  How has multiple novels under your belt changed how you accept to critism?
SH:  I’ve never been bothered by criticism.  I wasn’t at the beginning and I’m certainly not now.  Most critics are frustrated writers and to be honest I don’t even read reviews.  There’s no point.  Most critics are seeking to draw attention to themselves not make a reasoned judgement on what they’ve read.  When I was younger I used to be more aggressive if I met people who’d criticised me but now I couldn’t give a fuck.  Any business where you put your own creation into the public domain means you’re going to get criticised by someone so the first thing you need is a thick skin.  If you don’t like being criticised then don’t produce work that’s going to be heard, read or seen by lots of people.  Just do what you want to do and forget about the critics.  They’re only jealous anyway.

FT:  On long journey's, reading is often the pleasure of choice, who's work will you grab at the airport to ensure a good journey?
SH:  I don’t read fiction and haven’t for years.  If I ever read it’ll be non-fiction.  Usually military history.  The only fiction I read is Thomas Harris or older literature like M.R James.  I used to read a lot before I became a writer but once I was doing it for a living I couldn’t be bothered to read what anyone else was doing.  As for buying a novel at the airport the choice of authors on view there is so limited thanks to the booksellers you’d only have about twenty to choose from anyway!

FT:  Out of all your novels, which is your favourite and why?
SH:  My favourite of my own novels is RENEGADES because it introduced Sean Doyle who I mentioned earlier.  Also along with DYING WORDS I think it is the most complete of the books I’ve written (if that doesn’t sound too pretentious…).  I like all of them for different reasons though.  I love the earlier books because they had so much energy (a bit like I used to have).  It was just me having a bloody good time.

FT:  With everyone having thier own personal view as to who should be cast in a film version of thier work, who do you think should play your principle protaganists and why?
SH:  None of my books will ever be filmed so it’s a bit of a redundant question I’m afraid.   If any were filmed I’d just hope that someone decent was cast but knowing my luck they’d cast Jason Statham as Sean Doyle.  However, as long as I was paid enough for the rights I wouldn’t really care.  All writers know that once you sell film rights what ends up on the screen will be nothing like the book but if they pay you enough who fucking cares?  The readers know that film companies fuck around with books so if it’s a flop you can blame it on the film company and if it’s great you can say it’s because it was based on your book!

FT:  Authors are generally a superstitious lot and upon completion of novels follow a certain ritual, what is yours and how has it changed from the original?
SH:  I used to have superstitions but not anymore.  I used to deliver the manuscript in the same bag but that was about it.  Now it’s just a case of sending the manuscript by e-mail!  Not very exciting really.

FT:  What was your impression of an authors lifestyle and status and how has that interpretation changed since you've published a number of books?
SH:  I had no preconceived ideas and I still haven’t.  The lifestyle for a successful author is the most privileged there is that’s why no author should ever moan about being depressed or under pressure.  If you’re successful there is no pressure.  The money that you’re paid negates that.  Any successful writer who whines about their life should shut the fuck up and look at how normal people have to earn money.
FT:  What are the best words of wisdom or tip that you'd give to a new or soon to be published author?
SH:  My tips to a new or soon to be published author would be don’t expect much.  Don’t think it will last too long, make the most of it while it does, hope you’ve got a good agent but above all don’t take yourself too seriously.  To anyone thinking of trying to become a writer I’d offer just one word of advice.  Don’t.