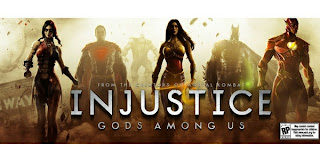 Hail Mighty Readers and Followers of the Calloused Thumbs,
We've been hearing a bit about this game for a while and whilst it's been on our radar we were waiting to get a good bit of news before passing it onto you.
Here, is your chance to get your say on which Hero/Villain would win in a massive DC beatdown.  Theres huge choices to make, top notch combat moves that looks not only sweet but graphically is very smooth.
But why take our word here's some trailers for you:
Announcement Trailer
Injustice: Gods Among Us - Catwoman
As you can see it's looking pretty good, so if there's a hero or villain you've always wanted to beat down, this'll be your chance in 2013 on the following formats:
Xbox 360
PS3
Nintendo Wii U
All the best and more on this as we get it,
Gareth and Lady Eleanor
Posted by Falcata Times at 12:42